In Which the Church Ladies Doth Protest 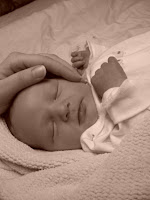 From the Winter 2008/2009 issue of Vogue Knitting: an interview with Lisa Anne Auerbach, author of Sweaters that Talk Back. Partisan comments have been removed from the excerpt below because Church Ladies is not a political site.

Vogue Knitting: How would you feel if a knitter bought your book and redid a pattern to have it say "Make abortion illegal?"

Auerbach: I totally encourage those who disagree with me to make patterns that reflect their side of the story... It seems conservatives are pretty uncreative... Even the conservative groups on Ravelry aren't making anything interesting. So if any conservative ... pro-life knitter thinks it's a good thing to express him or herself using knitting, that's great!

I would beg to differ that pro-life knitters don't make anything interesting. Historically, the beautiful Aran and Shetland patterns came from people whose lifestyle was based on home and hearth. Having lived in the metro area of major American cities, I have to drive to the more conservative suburbs or rural areas to get to a big box craft store, which are located with their niche market.

We've featured the handiwork of our readers before. Do any of our readers have a baby or other pro-life knitting/crochet project they'd like to share? Tell us about it in the comments and email us pictures to post!
Posted by Lucy at 7:53 AM