Some games to while away the April showers. 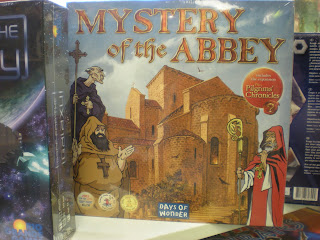 Mystery of the Abbey is a whodunit game with a twist. A monk has been murdered in a medieval French Abbey. Players maneuver their way through the Abbey trying examining clues and questioning each other to find out who is the culprit. A masterful game of deduction! 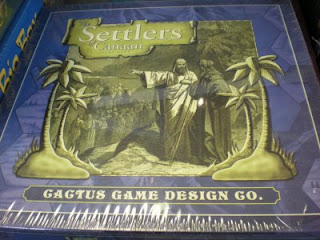 The Settlers of Canaan takes place in the territory of Canaan off the coast of the Great Sea. Each player represents a tribe of Israel seeking to settle in Canaan Guide your tribe through the fertile lands of Canaan. Each hex space will yield resources that you can cash in for roads, settlements and cities. Harvest resources of stone and ore from the land to help build Jerusalem and receive King David's blessing. Harvest timber, grain, wool, and brick to build more roads and settlements to expand your territory Work quickly Your opponents are moving to settle the most fertile parts of Canaan You also need to be wary a plague could come upon you at any time and destroy your harvest. 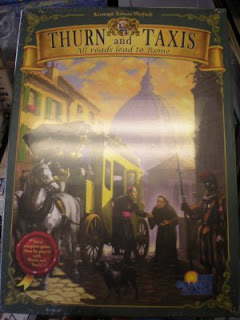 This 2nd expansion for Thurn and Taxis is actually two in one! In Audience, each player sends 5 clergyman to attend an audience with the Pope in Rome. The players endeavor to make certain the carriages with the clergyman arrive, but not too early! A player who arranges for his cardinal to arrive at just the right time will score more points than the player who manages the same with a simple priest. In Offices of Honor, the players try to use the office holders as evenly as possible, in order to receive different office tiles. The more different tiles a player can return at one time, the greater benefits he receives. All Roads lead to Rome contains two expansions. Whether you play Audience or Offices of Honor or both together with Thurn and Taxis, they will take you and the game to a new dimension.

I remember playing a board game called Limbo that was a Catholic doctrine version of Trivial Pursuit on high school confirmation retreats. Does anyone else?
Posted by Lucy at 1:04 PM