A most dolorous Lent to you all! If you're looking for what not to serve for Lent, head on over to Amy Welborn's Gallery of Regrettable Lenten Foods. I'm afraid the recipe below, on the other hand, is 100% free of Ched-O-Bit or Fish Supreme.

There are multiple components to assemble here, but if you have a good mise-en-place, it all comes together quickly. Well before dinner time, I had the liquid for the grits in the pan, the succotash all chopped and mixed, and the artichoke hearts draining on a paper towel. After that, everything came together in the time it took to cook the grits.

You can use almost any kind of meltable cheese in the grits. The original recipe calls for smoked cheddar, but plain sharp cheddar, chevre, or swiss would all be tasty in their own way, too. 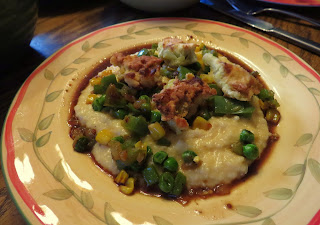 Adapted from The Southern Vegetarian

Cheese Grits:
Combine stock, milk, and garlic in a large saucepan and bring to a boil. Whisk in grits, reduce heat to low, and simmer until done, about 10 minutes. Add cheese, stir until melted. Salt and pepper to taste.

Succotash
Heat butter and oil in a large skillet over medium-high heat until just smoking. Add remaining ingredients and cook, stirring only occasionally, until vegetables have browned a bit. Remove vegetables from pan.

Mustard Pan Sauce
Deglaze the succotash skillet with the stock, add mustard and cook until reduced by half.

Panfried Artichoke Hearts
Toss artichoke hearts in egg, then in flour. Heat oil in a 10-inch skillet until shimmering, then fry artichokes for about 2 minutes per side until browned.
Posted by Thérèse at 8:13 AM No comments: