Silk burse from a sow's ear 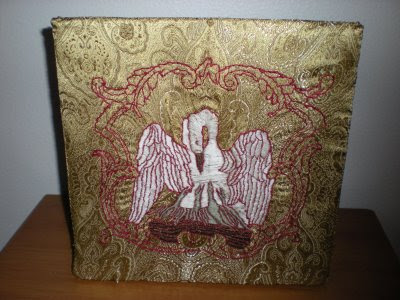 I was originally going to title this post 40 Hours Devotion, but the project took a bit longer...

Above is a burse I rescued from a local priest's hideous burse drawer and re-covered. In its new glory it was first used at a recent Church Lady wedding. As the receiving priest is fairly newly ordained, a gold burse is a nice way for him to to supplement his white vestments and emphasis solemnities such as Epiphany and Candlemas.

The original burse was violently jungle green and studded with rhinestones. It was so hideous that my computer has eaten all documentation of its original state.

For the new cover, I used the gold brocade that was popular among church ladies this season. Due to the shiny texture of the fabric, I had trouble transferring the level of detail of my chosen design using conventional means. Instead, I printed the design on regular bond paper, and tacked that into place on the brocade. I then began the hand embroidery, sans hoop.

Using a variety of plys of embroidery floss (1 for fine detail, 2 for medium, 3 for strong emphasis) I embroidered the line work in desired detail, using a back stitch for a tight line. Using a seam ripper, I carefully removed the excess paper.

I then satin stitched the fills: the feathers and the nest. After steaming the design flat, I trimmed the edges and finished them with Fray Check before folding the edges over and whip stitching the new panel on to the burse, the remainder of which was in good condition.

Here is am excerpt from New Advent's entry on burses:
A receptacle in which, for reasons of convenience and reverence, the folded corporal is carried to and from the altar. In Roman form the burse is ordinarily made of two juxtaposed pieces of cardboard about ten inches square, bound together at three edges, leaving the fourth open to receive the corporal. One outer side of the burse is of the same material and colour as the vestments with which it is used; the rest is lined with linen or silk.

Also, St Isidore's website has many helpful hints about altar linens, such as which way to orient designs.
Posted by Lucy at 5:08 PM 1 comment:

Congratulations to a very dear Church Lady who was married this weekend!

We thank you, O God,
for the Love You have implanted in their hearts.
May it always inspire them to be kind in their words,
considerate of feeling,
and concerned for each other's needs and wishes.
Help them to be understanding and forgiving
of human weaknesses and failings.
Increase their faith and trust in You
and may Your Prudence guide their life and love.
Bless their Marriage O God,
with Peace and Happiness,
and make their love fruitful for Your glory
and their Joy both here and in eternity.
Image source
Prayer source
Posted by Margaret Mary at 10:12 PM No comments: 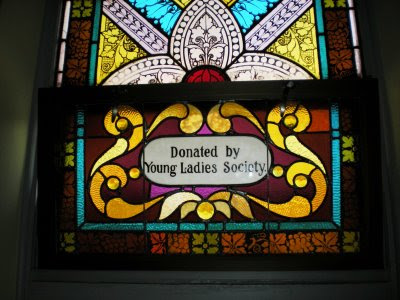 The legacy of some of our sodality sisters
St Mary's, Elkhart Lake, Wisconsin
And like living stones be yourselves built into a spiritual house, to be a holy priesthood, to offer spiritual sacrifices acceptable to God through Jesus Christ. [i Pet, 2-5]
Posted by Lucy at 8:47 PM 2 comments:

Check out Penney's sale on hemstitched linen tablecloths for all your domestic church feast needs, starting at $9.00 for a 52" square. Conveniently available in white, ivory, green, gold, violet, red, and black.
Posted by Lucy at 6:51 PM No comments: