Stamps are miniature documents of human history. They are the means by which a country gives sensible expression to its hopes and needs; its beliefs and ideals. They mirror the past and presage the future. They delineate cultural attainments, industrial works, domestic, civil, and social life. In a word, these vignettes give a vivid picture of the world, its occupants, and their multifarious endeavors. –Francis Cardinal Spellman

Last weekend, I unexpectedly toured the Cardinal Spellman Stamp Museum, featuring the collections of His Eminence and President Eisenhower. I admit, I was predisposed to like the place: as a young priest, Father Spellman was pastor of my parish and I have a connection to the women's religious order that once ran the museum. Cardinal Spellman was a great philatelist; the permanent collection features his own stamps, while the exhibitions change monthly. 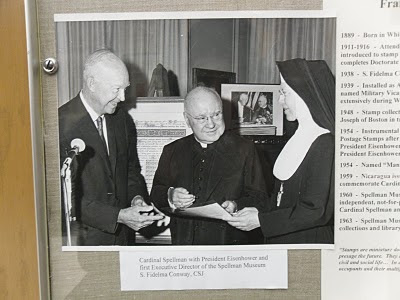 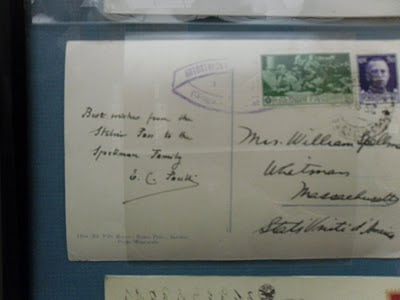 This postcard was sent by one Eugenio Cardinal Pacelli (who became Pope Pius XII) to Cardinal Spellman's mother. What a great piece of history!
Posted by Lucy at 3:21 PM