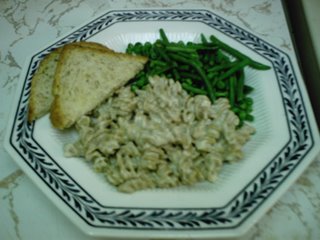 Blue Cheese Pasta
While living in Rome, I was dubious that being a great civilization involved eating moldy cheese. Moving to America's dairyland made me more open to the concept, and I have found a couple kinds I like. Think of this as mac & cheese for adults. I simplified a recipe for Spaghetti alla Gorgonzola [It's a great cookbook, but the recipes involve at least 4 pots. Although I suppose doing all those dishes could be penitential. ].

Blue Cheese Pasta
Serves 4 [I made a half recipe, in light of the 3 pounds of paella in my freezer]

Sautee the onion in the butter until softened, but still clear. While the onion cooks, prepare the pasta according to package directions and crumble the cheese in a bowl. In a blender or food processor, combine the onion mixture with the milk & cheese, blending until smooth.
After the pasta is done & drained into a colander, gently heat the cheese sauce in the pasta pan and sautee some vegetables in the onion pan. Add the pasta and black pepper to the sauce pan and toss, coating completely. Serve with vegetables.

NB:
1. If you find blue cheese is too salty for you, consider substituting a milder cheese for a portion of the quantity. I used 2:1 bally cashel to pecorino ratio.

2. If the cheese sauce looks too thin after being heated, dissolve 1 t of cornstarch in water and add it to the sauce.
Posted by Lucy at 10:25 AM