Happy New Liturgical Year!  As has been our custom, the Church Ladies have compiled a list of patron saints for 2016, based on the Holy Father's Jubilee Year for Mercy.  You'll see some well known saints, but also saints from around the world and across history.  To use with your family or church group, simply print the image above and cut into slips for selection.  We wish you the best for the upcoming year, and regret that due to other obligations on our time, we can no longer draw saints for individuals. 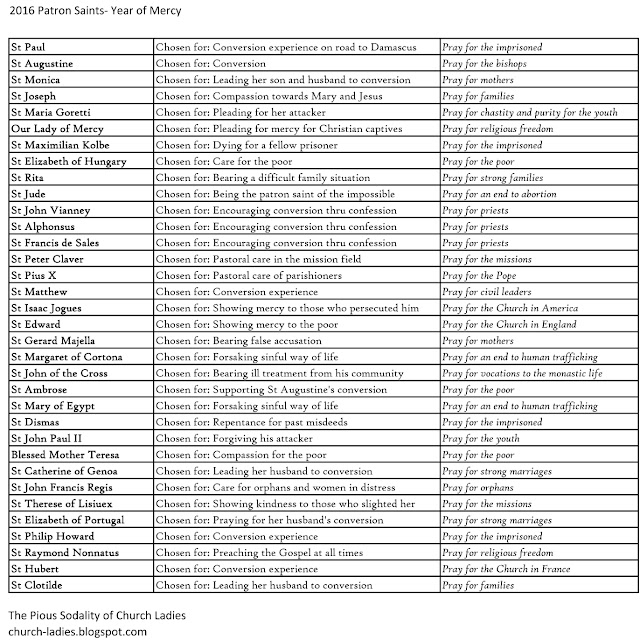 On the first of January a new calendar year begins. On the first Sunday of Advent the new year of the Church begins. Therefore, the Saturday preceding the first Advent Sunday has something of the character of a New Year's Eve. One of the old customs is to choose a patron saint for the new year of the Church... We always choose them according to a special theme. One year, for instance, we had all the different Church Fathers; another year we chose only martyrs; then again, only saints of the new world....During the war we chose one saint of every country at war.
After our first gathering around the Advent light, and the singing of the first Advent hymn, an air of expectancy spreads over the family group; now comes the moment when the mother goes around with a bowl in which are the little cards with the names of the new saints. Everybody draws a card... This saint will be invoked every morning after morning prayer. Everyone is supposed to look up and study the life story of his new friend, and some time during the coming year he will tell the family all about it...But the custom has become very dear to us, and every year it seems as if the family circle were enlarged by all those new brothers and sisters entering in and becoming known and loved by all.
(Maria Trapp, Around the Year with the Trapp Family)