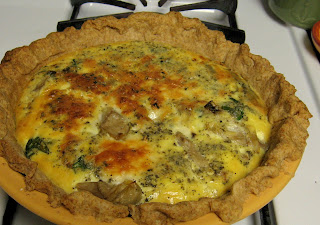 
Combine flour and salt in bowl. Cut in fat with a pastry blender. Slowly stir in water, using just enough to bring dough together. Roll out dough and place in a 9½" pie pan. Line with parchment paper and fill with dried beans or pie weights. Bake at 350º for 15 minutes. Remove weights.

While crust is baking, place the dried tomatoes in a heat-proof bowl, cover with boiling water, and let stand 5 minutes. Place the spinach in a microwave-safe bowl, cover, and microwave 1½ minutes, until wilted.

Drain spinach on paper towels. Remove tomatoes from the water and pat dry. Chop tomatoes into ¼" pieces (kitchen shears work well for this). Sprinkle tomatoes and spinach over the bottom of the crust.

Pour the egg mixture over all, Arrange artichoke hearts on top.

Bake in a 350°F oven for about 40-45 minutes or until a knife comes out relatively clean (inside will be moist, but not liquidy) and top is golden brown.

Let stand for 10 minutes before serving.
Posted by Thérèse at 4:13 AM