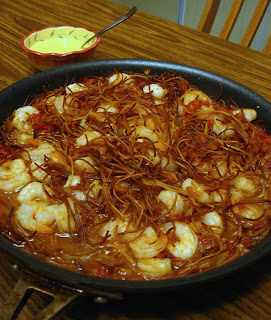 Every so often, a meatless day and a family celebration coincide. This Spanish dish, a cousin of paella, fits the bill nicely. If you don't have a broiler-safe skillet, you may transfer the mixture to a different pan, add the shrimp, and then broil as directed.

Place shrimp shells in a medium bowl with water, broth, and bay leaf. Cover and microwave about 6 minutes until shells have turned pink. Set aside.

Break spaghetti into pieces by rolling it up, half at a time in a clean kitchen towel and snapping the bundle over the edge of the counter at 1-2" intervals. Add to a broiler-safe 12″ skillet, with 2 teaspoons oil and toast over medium-high heat, stirring frequently.until browned to the color of peanut butter and nutty-smelling, 6-10 minutes. Transfer into bowl and wipe out the skillet.

Heat 2 tablespoons oil in skillet over medium-high heat until shimmering. Saute onion together with ¼ tsp salt until onion is softened and brown on the edges, 4-6 minutes. Add tomatoes and cook until mixture is thick, dry, and slightly darkened in color, 4-6 minutes.

Reduce heat to medium, and add remaining garlic, both paprikas, and anchovy paste. Cook about1½ minutes, until fragrant. Add spaghetti to skillet and stir to combine.

Adjust an oven rack so that it’s 5-6" from the broiler element, and heat broiler.

Strain the shrimp broth into the skillet. Add wine, ¼ teaspoon salt, and ½ teaspoon pepper. Increase heat to medium-high and bring to simmer. Cook uncovered until pasta is just tender, 8-10 minutes.

Scatter shrimp in skillet and stir to partially submerge. Transfer skillet to oven and broil until shrimp are opaque and surface of pasta is dry with crisp, browned spots, 5-7 minutes.

Remove from oven and allow to cool, uncovered for 5 minutes. Sprinkle with parsley and serve with lemon wedges and aïoli (below), if desired.

Aïoli
The original recipe called for whisking by hand, but I thought my wrist was going to give out by the end. Make sure to use good-tasting olive oil, since it makes up the bulk of the sauce.
In a blender, combine all ingredients except oil. While running the blender, drizzle in the olive oil through the hole in the lid very slowly, until thick and creamy. Add additional salt and pepper to taste.