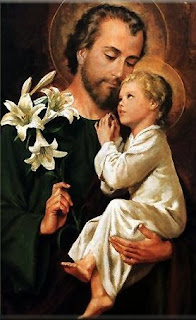 Today we celebrate the solemn feast of St. Joseph.

We see St. Joseph's image is everywhere, but how much do we really know about this saint?

He is the patron and protector of the Church, just as he was he protector and patron of Our Lord and Lady while they walked this earth. We know that he was a "just and holy man" - the perfect pious gentleman. We usually think of him as a bearded man in green and brown holding the Christ Child and a staff of lilies.

But how much more do we know?


St. Joseph never speaks in the Gospels. We find him in Matthew and Luke, but only briefly. The Gospels say little about him. Yet we know that he was a carpenter. We read that he was a "just man" from the line of David. His age at the time of his betrothal and marriage to Our Lady is highly debated.

Many of our statues and images depict him as a middle-aged or even elderly man. We sing in the Cherry Tree Carol "Joseph was an old man, a very old man was he, when he married Mary in the land of Galilee."

But was Joseph really old?

The concept of the elderly Joseph comes from the apocryphal gospel The Protoevangelium of James. There we read:

And when she was twelve years old there was held a council of the priests, saying: "Behold, Mary has reached the age of twelve years in the temple of the Lord. What then shall we do with her, lest perchance she defile the sanctuary of the Lord?"

And they said to the high priest: "You stand by the altar of the Lord; go in, and pray concerning her"... behold an angel of the Lord stood by him, saying unto him: "Zacharias, Zacharias, go out and assemble the widowers of the people, and let them bring each his rod; and to whomsoever the Lord shall show a sign, his wife shall she be." And the heralds went out through all the circuit of Judæa, and the trumpet of the Lord sounded, and all ran.

And Joseph, throwing away his axe, went out to meet them; and when they had assembled, they went away to the high priest, taking with them their rods. And he, taking the rods of all of them, entered into the temple...and Joseph took his rod last; and, behold, a dove came out of the rod, and flew upon Joseph's head.

And the priest said to Joseph, "You have been chosen by lot to take into your keeping the virgin of the Lord."

But Joseph refused, saying: "I have children, and I am an old man, and she is a young girl. I am afraid lest I become a laughing-stock to the sons of Israel."

And the priest said to Joseph: "Fear the Lord your God, and remember what the Lord did to Dathan, and Abiram, and Korah; how the earth opened, and they were swallowed up on account of their contradiction. And now fear, O Joseph, lest the same things happen in your house."

And Joseph was afraid, and took her into his keeping. And Joseph said to Mary: "Behold, I have received you from the temple of the Lord; and now I leave you in my house, and go away to build my buildings, and I shall come to you. The Lord will protect you."

Here we see St. Joseph as an old widower, with children, and frankly, a bit of a jerk.

So was that St. Joseph? The Angelic Doctor, St. Thomas Aquinas, certainly did not think so as he condemned the Protoevangelium as "apocryphal ravings."

While St. Thomas doesn't offer any insights on the life of St. Joseph, a number of holy mystics do. Ven. Maria de Agrida and Bl. Anne Catherine Emmerich both write of St. Joseph as seen in their visions.

Ven. Maria writes in The Mystical City of God that:

"Among the number was Joseph, a native of Nazareth. and then living in Jerusalem; for he was one of the descendants of the royal race of David. He was then thirty-three years of age, of handsome person and pleasing countenance, but also of incomparable modesty and gravity; above all he was most chaste in thought and conduct, and most saintly in all his inclinations. From his twelfth year he had made and kept the vow of chastity. He was related to the Virgin Mary in the third degree, and was known for the utmost purity of his life, holy and irreprehensible in the eyes of God and of men."

Bl. Anne Catherine, in The Life of the Blessed Virgin Mary, does not specify St. Joseph's age, but merely that he was "unmarried." His actions and demeanor in her writings do, however, seem more reflective of a younger man than an older one.

To note a third: Padre Pio reportedly insisted the St. Joseph was even younger - perhaps only 18 when espoused to Our Lady.

Numerous other scholars and theologians have agreed that Joseph was certainly not old. A number believe that he may have been even as young at 16 - only a year or two older than Our Lady.

Why would St. Joseph's age matter? Perhaps it doesn't, but it seems easy enough to believe that an old man, already a father, would be more likely to live chastely with a girl he could regard as his granddaughter (or at least daughter). The virtue required of a teenage or young adult man to care for a pregnant girl, help her raise her son, all the while living a perfectly chaste life, without committing a single personal sin, would be truly heroic. That is the kind of virtue that merits the title "Patron of the Universal Church" and the kind of virtue you'd hope the patron of husbands would possess.

Thank you for this post! I have never considered the heroic virtue of a young Joseph, and, frankly, the thought fills me with joyful wonder and admiration! I am seriously almost crying... what a great description!

One of my favorite quotes about St. Joseph comes from Pope Benedict's Angelus Address on December 14 of this past year:

Let us look at the Nativity Scene: the Virgin Mary and St. Joseph do not seem like a very lucky family, they had their first child in the midst of great hardship, and yet are filled with deep joy, because they love each other, help each other and, above all, are certain that in their history God is at work, present in the Infant Jesus.