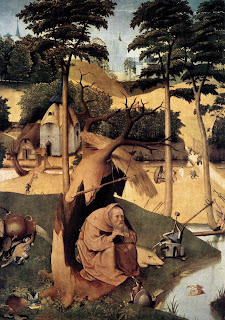 Lent is the time of the year where Catholic identity is strongest. We are recognizable by the external signs of our faith- the ashes, the abstinence from meat, public Stations of the Cross, and palms. I remember visiting a Protestant pen-pal in Germany during Lent several years ago. Her consciousness of how Catholics mark the season was so ingrained that she automatically served me grapes instead of tea biscuits and prepared separate meatless entrees for me, without even asking me about the more personal nature penances seem to take on in America.

For Lent, the season of prayer, fasting, and almsgiving, Church Ladies will be posting 40 meatless recipes, one for every day of the season. The recipes vary quite widely. Some are more penitential than others, but all are nutritious and tasty. You might consider donating the money you don't spend on meat to charity. While in ages past, Lent was a more solitary time, you could strengthen Christian community by gathering together- either at a parish or small group level- for Stations of the Cross and a soup dinner.

Whether you are looking for inspiration for meatless Fridays, or are searching for a different way to keep the season, we hope the recipes help you. Remember your calling to be the light of the world and radiate holiness. Perhaps your joyful example of self-sacrifice will lead someone home to the Church this Easter.

Today's hint of the day: If your family has someone who brings their lunch to work or school, whip up a batch of a meatless meal this weekend, and freeze it in individual containers so the coming week, with 2 days of abstinence, or a Lenten Friday won't catch you unprepared.

Image: The Temptation of St Anthony Abbot
Posted by Lucy at 9:52 AM