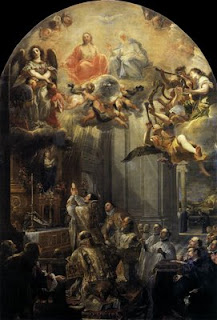 "Religion, M. Poirot, can be a great help and sustenance- but by that I mean orthodox religion."
[Agatha Christie, The Labors of Hercules]

This Church Lady (and her pastor) are Quite Fond of the works of Mrs. Christie.

But did you know about the Agatha Christie Indult?

The "Agatha Christie indult" is a nickname applied to the permission granted in 1971 by Pope Paul VI for the use of the Tridentine Mass in England and Wales Following the introduction of the Mass of Paul VI to replace the former rite in 1969-1970, a petition was sent to the Pope asking that the Tridentine Rite be allowed to survive in the dioceses of England and Wales. The petition noted the exceptional artistic and cultural heritage of the Tridentine liturgy, and was signed by many prominent Catholic and non-Catholic figures in British society, including Robert Graves, Professor Sir Maurice Bowra, Iris Murdoch, Sir Kenneth Clark, Cecil Day Lewis, Dame Joan Sutherland, Nancy Mitford, two Anglican bishops - and the crime novelist Agatha Christie. Cardinal John Heenan, the leader of English and Welsh Catholics, subsequently approached Pope Paul VI and asked that use of the Tridentine Mass be permitted. On 5 November 1971, the Pope granted the request. Between then and the granting of the worldwide "universal indult" in 1984, the bishops of England and Wales were authorized to grant permission for the occasional celebration of Mass in the old form, with the modifications introduced in 1965 and 1967. It should be noted that English Catholics had a particular emotional attachment to the Tridentine Mass, as the Mass which had been celebrated by the English martyrs of the Reformation and by priests in the years in which Catholicism had been subjected to sometimes severe persecution. The indult acquired its nickname by virtue of a story told about the Pope's acceptance of the petition: The story is that Pope Paul read through the letter in silence then suddenly exclaimed, "Ah, Agatha Christie!" and then signed it. He must have been one of her fans. The English Indult of 1971 was granted and thus was saved the old Mass. Ever since it has been known informally as the Agatha Christie indult. The text of the petition and of the response of the Sacred Congregation for Divine Worship to Cardinal Heenan's request are available online here

Of note, the Indult itself appled to the 1965 rite of the Mass with the 1967 Tres Abhinc Annos modifications:

His Holiness Pope Paul VI, by letter of 30 October 1971, has given special faculties to the undersigned Secretary of this Sacred Congregation to convey to Your Eminence, as Chairman of the Episcopal Conference of England and Wales, the following points regarding the Order of the Mass:

1. Considering the pastoral needs referred to by Your Eminence, it is permitted to the local Ordinaries of England and Wales to grant that certain groups of the faithful may on special occasions be allowed to participate in the Mass celebrated according to the Rites and texts of the former Roman Missal. The edition of the Missal to be used on these occasions should be that published again by the Decree of the Sacred Congregation of Rites (27 January 1965), and with the modifications indicated in the Instructio altera (4 May 1967).

This faculty may be granted provided that groups make the request for reasons of genuine devotion, and provided that the permission does not disturb or damage the general communion of the faithful. For this reason the permission is limited to certain groups on special occasions; at all regular parish and other community Masses, the Order of the Mass given in the new Roman Missal should be used. Since the Eucharist is the sacrament of unity, it is necessary that the use of the Order of Mass given in the former Missal should not become a sign or cause of disunity in the Catholic community. For this reason agreement among the Bishops of the Episcopal Conference as to how this faculty is to be exercised will be a further guarantee of unity of praxis in this area.

2. Priests who on occasion wish to celebrate Mass according to the above-mentioned edition of the Roman Missal may do so by consent of their Ordinary and in accordance with the norms given by the same. When these priests celebrate Mass with the people and wish to use the rites and texts of the former Missal, the conditions and limits mentioned above for celebration by certain groups on special occasions are to be applied.

With my highest respects, I am

Yours sincerely in Christ,