A $9 pork shoulder, 6 ways from Sunday 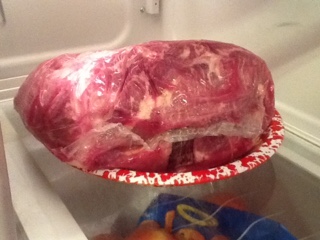 It took me a long time to come around to the idea of a Sunday roast. My parents grew up without refrigeration, and as a result, even once we immigrated to the US, each meal was cooked daily with no concept of leftovers. My first "how-to" encounter with a Sunday roast was about 10 years ago in a Nigella cookbook, where the roast was accompanied by several labor intensive sides, leading me to conclude, "Sunday, the day of rest for everyone but Mom." While I appreciated the low effort of Sabbatarian baked beans, I wanted the Lord's Day to have a more special meal. Eventually, by cooking my way through Julia Child's Mastering the Art of French Cooking, I was able to get pretty quick at getting a braise underway. I came to realize that no thirty minute meal had anything on the Sunday roast and its trickle down effect making the rest of the week easier.

Pork prices have been low lately, and I bought a couple 7 lb bone in pork shoulders in COV for about $9 apiece. I consider myself a pretty frugal cook who doesn't waste food, but even I was surprised how many meals the roast contributed to for my family of four this week. (NB: We were supposed to have company over on the "roast" night, but they cancelled due to illness, so there was more leftover meat than planned).

1. Roast
This slow cooked pork shoulder recipe is about as easy as it comes and you wouldn't believe meat cooked for 6 hours could be so pink and tender.  Add a side of crockpot mashed potatoes and a cabbage slaw, and you would be hard pressed to find an easier Sunday dinner.

2. Pulled pork
I mixed half the remaining meat with homemade barbecue sauce for pulled pork sandwiches.

4. Pork Skin
There was a crisp pork skin on the roast that I used to flavor braised green beans, a side for the pulled pork.

5. Bone simmered into a stock
I simmered the pork shoulder bone with other kitchen scraps to make a couple quarts of stock for soup.

6. Fat rendered out
When preparing the glaze for the roast, I skimmed about 2/3 cup of fat into a jar and refrigerated it. Just a spoonful has added a lot of flavor to sautees and refried beans, and has been the base for gravy.

So, to recap, a $9 pork roast provided the meat for three dinners and flavored several other dishes. Not too shabby.
Posted by Lucy at 9:00 AM

Our favorite use for leftover pulled pork is tacos. I fry it (preferably in bacon grease) until the edges get black and crispy, then simmer it in a mixture of orange juice and stock with lots of cumin and other taco spices (I would imagine enchilada sauce would work well, too). Fajita veggies, grilled pineapple, and queso fresco are all favorite toppings to go with it, but it really works well with almost anything.

Tacos are usually our default for pulled pork, but I used the second pork shoulder to make carnitas- half for us and half for a neighbor with a new baby. The recipe in the book has lime juice and garlic.